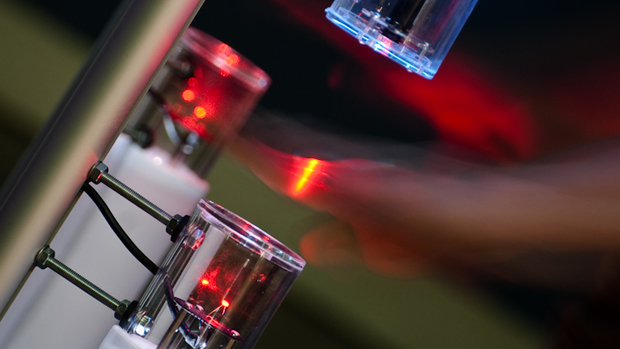 “Bell-ringing is the most English of sounds. While many nations hang bells in the towers of their churches and religious foundations to call the faithful to prayer, it was in England that the ringing of bells “full circle” with rope and wheel was invented and then elevated to an art form. Only in these islands – and a handful of other places in the English-speaking world where bell-ringing was exported by empire – can you hear practised the art of “change-ringing”, the ringing of bells in fiendishly complex mathematical patterns in which no sequence of changes is repeated.”

PEAL is an interactive sound installation for The Leeds Arena which models the layout and operation of a traditional church bell tower, replacing the bell ropes by an optical sensing system where lasers act to trigger the ringing process of the individual bells. When a beam is interrupted by a player’s hand, the installation reproduces the ringing of the appropriate bell through a multi-speaker sound system, as if its corresponding rope had been pulled.

This standalone bell tower – or campanile – reproduces the distinctive ringing sounds and characteristics of five churches spread across the Leeds Metropolitan District and models the physical characteristics and mechanics of actual rings of bells – to try and provide a faithful experience of some of the skills and techniques required to ring traditional bell changes.

Audio field recordings, HD video and high quality photography captured the church buildings, their rings of bells and their bell-ringing activities and were used to create five 10 minute, visually stunning films – one for each church and each of the five screens in The Leeds Arena.

The installation operates in various modes. As a “timepiece” it marks the hours and quarters of the day with distinctive ‘named’ changes. In “self-play” mode it plays through (and displays on-screen) a series of permuations or “changes” over periods which might last as long as several hours. As an “interactive” it shows on-screen tutorial materials and a variety of bell ringing patterns which visitors will be encouraged to attempt to reproduce by “playing” the laser beams. As an “instrument” it can be used for performance by members of Leeds bell-ringing groups themselves.

We believe that the unique sonic quality, physical mechanics, permutational mathematics, historical resonance, community focus and sheer emotive quality of bell-ringing make it an ideal topic for artistic exploration and interpretation – and perfect for a sound art festival that claims “to step out from traditional venues and into spaces that lie at the heart of the community – inspiring practitioners and the public to reconsider their environments.” 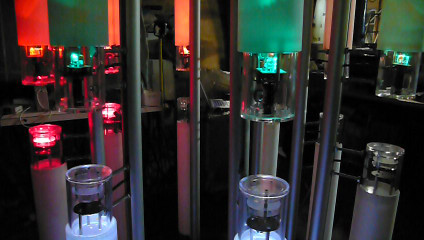 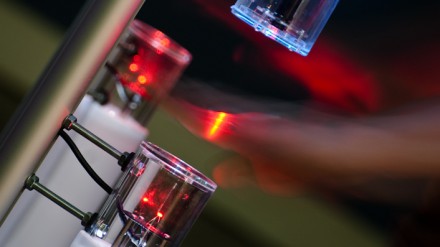